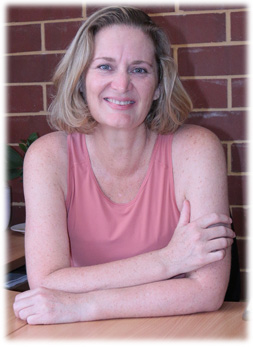 I opened this yoga studio in Kardinya in January 2010. Prior to that, I taught yoga for 2 years in Kalgoorlie. As well as yoga, I have been teaching dancing for over 25 years.

Yoga seemed to call to me. Initially I started reading about it in magazines when yoga was still almost unheard of. As a dancer and a spiritual seeker, yoga jumped out as something I had to learn.

There were no teachers where I was living in Kalgoorlie, so videos, books, magazines and stick figure drawings on basic websites were my guides. Then I found Baron Baptiste’s “Journey Into Power” on a sale table and that $7 book transformed my life.

Since then I have attended yoga teacher training in the USA with Baron Baptiste many times, with each training being critical in my development as a teacher and yogi.

Obviously Baptiste Power Vinyasa Yoga forms the framework of my classes, however I am continuously researching yoga and finding new ideas to incorporate into our ever evolving classes.

Beyond yoga, I have a Bachelor of Arts (Arts Management) from the WA Academy of Performing Arts and was the Manager of the Goldfields Arts Centre for 12 years. In 2021 I completed a Master of Arts (Studies in Religion), from the University of New England, which I originally started with an intention to further my understanding of the eastern religions from which modern yoga draws its roots, as well as a curiosity to understand other spiritual traditions. These studies have greatly informed my worldview and hopefully my approach as a teacher.